Bring to life the rocket launch that took humans to the moon with the meter-high (approximately 1: 110 scale) model rocket of the NASA Apollo Saturn V. This space toy with astronaut figures lets you role play the many missions the Saturn V completed.

After building the Saturn V rocket, you can display the spacecraft horizontally with 3 stands. The Lunar Lander docks with the command and service modules while the Lunar Orbiter sends the rocket into space. 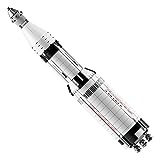